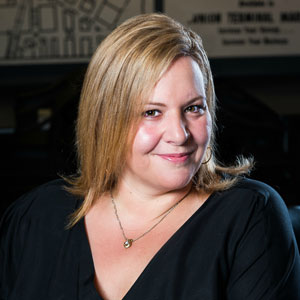 To prepare something from scratch takes vision, energy, resourcefulness, and…more energy.  Not a problem for Gina Chersevani, whose larger-than-life personality and scattershot interests belie her ability to apply great focus to the task at hand – crafting the most innovative cocktails and taking creative liberties which manifest dishes that are not the average knish or overstuffed bagel.

A native New Yorker, Chersevani was born with saucy meatballs on a baby spoon, the daughter of a Northern Italian chef. With her chin barely reaching the kitchen countertop, her father trained her early on how to prepare mozzarella, meatballs, sausage, and a secret marinara sauce that are all a part of her brag-worthy repertoire of recipes.  At the University of Maryland, she majored in psychology and fine arts, two fields that would later lend themselves naturally to her life’s work.  There she began bartending, and also spent many hours in the chemistry lab. “I got really good at burning holes and making bubbles,” Chersevani remembers. She enjoyed art theory and embarked on a voracious reading habit – even now, Chersevani’s conversation is liberally sprinkled with references to James Joyce and Mark Twain.

After graduating, she landed a martini-making gig in Washington, DC.  Quickly learning the ropes and earning her chops in the local industry, she found her skills in high demand around town. Chef and restaurateur, Jamie Leeds, asked her to design the beverage program at 15 Ria. The imaginative cocktail menu she developed for Poste Moderne Brasserie at the Hotel Monaco racked up awards. She then signed on to be master mixologist for Rasika, the acclaimed modern Indian restaurant, where she was introduced to exotic spices like saffron, cloves, and lotus. She crossed the Potomac to become Bar Chef for the Neighborhood Group, headquartered at the group’s renowned gastropub, EatBar and upscale neighborhood restaurant, Tallula.  In 2009, she began a cocktail-culinary collaboration with chef Peter Smith, the creative powerhouse behind PS7’s, a former fine-dining anchor of Washington’s downtown Chinatown neighborhood. Chersevani then joined forces again with Jamie Leeds delivering exceptional, adventurous cocktails.

After career twists and turns, taking the patrons of former restaurants on a worldly journey of cocktails, Gina struck out on her own to open Buffalo & Bergen at Union Market in Washington, DC. The 1930’s style soda counter serves handcrafted knishes and loaded bagel sandwiches inspired by interweaving the memories of places like, Coney Island, with the sentimental ingredients of her childhood. Drinks range from nostalgic Egg Creams to funky, spirit forward sips featuring custom syrups and sodas. “It’s a love letter to my home state – a celebration of how we live, eat, and entertain,” says Chersevani. Plans to open a new location of Buffalo & Bergen are underway in Capitol Hill in Spring 2019.

The casual, fun vibe of Buffalo & Bergen extends to Suburbia – located just outside of Union Market. Picket fences and picnic tables segment off this slice of urban paradise, with 10 draft beers, frozen mixed drinks, and draft cocktails served from this boozy, vintage airstream trailer. And, the summer of 2018 marked the debut of Wandering Oasis, a traveling cocktail truck flowing with frozen and tapped cocktail concoctions.

Well versed in all things spirited, Chersevani’s hyper flavorful drinks and syrups have earned attention from publications including The Wall Street Journal, The New York Times, The Washington Post, Wine Enthusiast, Food & Wine Magazine, and Washingtonian. Her awards and distinctions include The Beverage Journal’s “10 Mixologists to Watch” in 2008; winning Absolut Vodka’s “Best Martini” competition in 2008; and prevailing in the Restaurant Association of Metropolitan Washington’s contest to create the “Official RAMMY Cocktail” of both 2008 and 2009.  In 2010, she received the coveted Star Chefs Rising Star Award, recognizing her vision and dedication to the industry and was awarded the first ever RAMW “RAMMY” for best Beverage/Mixology program. The distinguished Tales of the Cocktail organization also bestowed two honors: induction into the Dames Hall of Fame and awarding Buffalo & Bergen as one of the best high-volume cocktail bars in the country.

Gina’s participation in pro-bono charitable projects amounts to what would be a full-time career for most.  Some of the organizations and events that benefit from her generous energy include Chefs for Equality Gala, The March of Dimes; the American Heart Association; Share Our Strength; Taste of the Nation [both Washington, DC and Philadelphia;] The James Beard Foundation Awards; Capitol Area Food Fight; Sips & Suppers, The Humane Society Washington, DC; and Tales of the Cocktail.

One of the most satisfying aspects of Gina’s career is sharing her expertise with others.  “There’s no joy in keeping it secret,” she states.  She treats her staff to her extensive knowledge of chemistry, especially as to how it affects a pairing or the creation of a cocktail.

Chersevani is an industry leader, a pillar in the DC spirits community, and a generous mentor to impassioned newcomers.