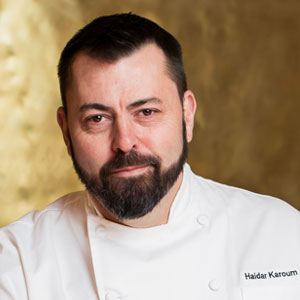 HaidarKaroum is the chef and owner of Chloe, located in Washington D.C.’s southeast waterfront neighborhood.

Karoum was named a semifinalist for the James Beard Foundation awards Best Chef: Mid-Atlantic category in 2009 and 2014. Also in 2014, he was named RAMW Chef of the Year.

Karoum spent years under esteemed D.C. restaurateur and chef Nora Pouillon, first as a sous chef at her eponymous Restaurant Nora, and eventually working his way up to executive chef at Asia Nora. At Poullion’s restaurants, Karoum not only immersed himself in eastern flavor profiles, learning to meld Chinese, Vietnamese, Thai, Indian and Japanese influences, but also gaining a love of seasonal cooking and an appreciation for local, organic sourcing. Previous positions in the District include work under Gerard Pangaud at Gerard’s Place and with Michel Richard at Citronelle, positions which gave his cooking a foundation in French technique and an eye for creative approaches to classic cuisine.