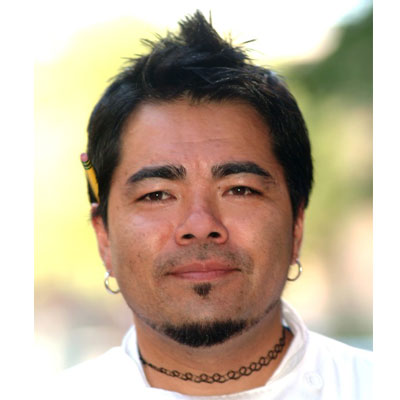 Chef Katsuya Fukushima is a partner and the executive chef of Bantam King, Haikan, soon-to-open Hatoba, and award-winning authentic Japanese ramen shop and izakaya, Daikaya which opened in early spring 2013. This popular Chinatown restaurant spans two floors and showcases a lively izakaya-style restaurant upstairs, as well as a Sapporo-style ramen on the street level.

For two years, Fukushima and his partners planned Daikaya’s every detail, a tremendous project that Fukushima embraced with the passionate style and talent that has made him such a well-reputed chef at home and beyond Washington, DC.  Daikaya earned three stars from The Washington Post Food Critic Tom Siestema with its opening review, and was ranked in the “100 Best Restaurants” in Washington by Washingtonian magazine. Daikaya was also named one of GQ magazine’s “25 Best New Restaurants in America,” in February 2014, and captured “Best Japanese” in the Washington City Paper’s annual readers’ poll in April 2014. Daikaya’s food is highly personal and creative reflecting Fukushima’s background, which includes eighteen years of culinary expertise, a recent tour through Japan’s most popular ramen shops, kindling his own Japanese-American heritage.

In addition to opening Daikaya, Haikan, Bantam King, and preparing to open Hatoba in 2019, Fukushima has been juggling a packed calendar of culinary events and guest chef invitations. He has made appearances in national fundraisers such as The Great Chef’s Event benefitting Alex’s Lemonade Stand; the San Diego Food & Wine Festival; the CIA World of Flavors Conference, high-profile Share Our Strength No Kid Hungry dinners, DC Central Kitchen’s Capital Food Fight, amongst many others.

Fukushima cooked for Top Chef contestant Eli’s Kershstein’s wedding in 2013. He was also a featured chef at Saborea Puerto Rico in 2014, and joined in a panel discussion at the Goethe Institute for Asian American month. Fukushima has also taught modern cooking techniques class at L’Academie de Cuisine. He also served as a judge for COCHON 555 in 2014 and was a featured chef at the James Beard Foundation’s Taste of America dinner in October 2014 in Washington.

Before embarking on his own culinary career in 2010, Fukushima held a15-year tenure with DC-based ThinkFoodGroup by José Andrés, where he served as one of Andrés’ closest and most trusted collaborators.  In addition to holding positions as executive chef of José Andrés Catering by Ridgewell’s, executive chef for TFG’s Special Projects, and head chef of Café Atlántico, Fukushima played instrumental roles in opening both the critically acclaimed minibar by joséandrés in Washington, DC, and the Bazaar by José Andrés in Los Angeles.

Fukushima has cooked for some of the world’s most influential chefs such as Ferran Adria, Thomas Keller, Julia Childs, Jacque Pepin, Masaharu Morimoto, Alice Waters, David Bouley and many others. H has worked alongside other culinary leaders including José Andrés, founder of Nuevo Latino cooking Douglas Rodriguez, and SergiArola of La Broche in Madrid. Fukushima cooked with Rick Tramonto for TRU’s 5th and 10th anniversaries, and is routinely invited to participate in culinary events, celebrations, and assemblies across the U.S.A.  Worldwide, he has made appearances at Lo Mejor de la Gastronomia, Spain’s 10, and other international professional conferences.

Fukushima has been featured in a variety of media outlets including The Washington Post, Washingtonian, Wine Spectator, Food Arts,Bon Appetit, the Kojo Nnamdi Show, and several episodes of the “Fretz Kitchen”. Smithsonian Resident Associates highlighted Fukushima various times in their popular “Meet the Chef” series. Alongside Andrés, Fukushima appeared in episodes of Anthony Bourdain’s “No Reservations”, “Gourmet’s Diary of a Foodie”, and “Iron Chef America” where he went undefeated in two appearances.

Fukushima received his formal culinary training at L’Academie de Cuisine, graduating in 1995. Before deciding on a career in the kitchen, Fukushima attended the University of Maryland as a mathematics and art major.